As an interesting additional commentary to this, I quote this passage from the Wikipedia article about Passau:

“During the Renaissance and early modern period, Passau was one of the most prolific centres of sword and bladed weapon manufacture in Germany (after Solingen). Passau smiths stamped their blades with the Passau wolf, usually a rather simplified rendering of the wolf on the city’s coat-of-arms. Superstitious warriors believed that the Passau wolf conferred invulnerability on the blade’s bearer, and thus Passau swords acquired a great premium. According to the Donau-Zeitung, aside from the wolf, some cabalistic signs and inscriptions were added.[5] As a result, the whole practice of placing magical charms on swords to protect the wearers came to be known for a time as “Passau art”. (See Eduard Wagner, Cut and Thrust Weapons, 1969.) Other cities’ smiths, including those of Solingen, recognized the marketing value of the Passau wolf and adopted it for themselves. By the 17th century, Solingen was producing more wolf-stamped blades than Passau was. ”

I found a Thread on Myarmoury about the so called Passau Wolf, with a neat photo of one on an antique blade http://myarmoury.com/talk/viewtopic.30320.html

The wolf from the Passau coat of arms: 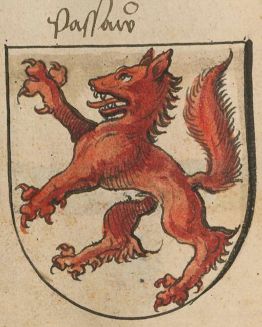