So there was a big difference between having arms and carrying arms. From the Roman Republic to 19th century North America, we tend to see laws requiring citizens to own arms, and banning anyone from carrying weapons, especially swords and knives, within city limits.

There were no real States in Europe other than Byzantium (sort of) and then the Ottoman Empire, in the High to Late Medieval period. France and England, some of the Iberian Kingdoms, and the Teutonic Order were trying to become States, but they weren’t quite there yet.

Anyway, the reasons we can speculate all day long about, the reality is that citizens routinely walked around armed in basically every town under every form of German Town Law, with a couple of exceptions. That is essentially what Prof. Tlusty’s book was all about (though she starts around 1520) and it’s certainly a big part of what my lecture was about.

Armed citizens, down to the rank of Artisan, appear routinely in the civic artwork of the period, their right to carry arms is specified in the town charters, it is discussed and litigated in the town council records, it is mentioned by chroniclers and in memoirs. And this was the case from at least the 11th Century through at least the 17th in at least 500 cities I know of. If you doubt my word on this which type of evidence would you prefer?

As for how they managed to have all these people carrying swords without constantly hacking chunks off of each other, Tlusty gets into that a lot and so does my lecture. There were a lot of formal laws against things like drawing your sword, various forms of making threats with it, and so on, and if you hurt someone in a fight you better have a good reason.

This is a mural in Augsburg by George Breau circa 1530, there is one for each season (you can see the others here) 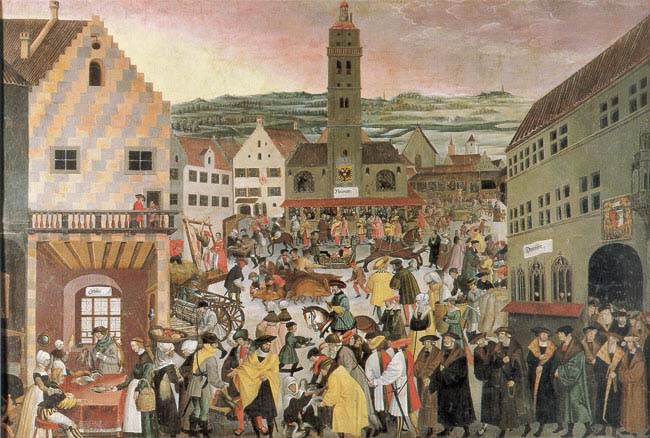 Note all the people carrying sidearms!

Note German Town Law was used from Flanders to Romania and from the Swiss Confederation to Finland. It wasn’t just in Germany.