Yes this is quite interesting, I liked the idea then and definitely see the correlation now with this.

The Gaelic / druidic lore was deeply into Rhetoric, in fact during the Early Roman Empire, it was apparently common for Greek and Roman nobles to hire a Celtic teacher for Rhetoric. One of the most interesting aspects of the science of Rhetoric is the science of mnemonics. Which (among many other things) has to do with kind of programming your own brain like with the memory palace. Some of the Renaissance scholars (like Raymond Lull and Giordano Bruno) believed that they could do something a lot like what you describe in your idea of ‘triggers’, using special symbols like this one: 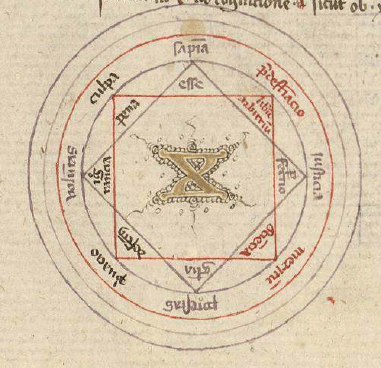 …and they also believed they could kind of ‘hack’ other people’s minds! This went on for a long time, Isaac Newton also believed this and got into some kind of ‘wizard battle’ with a rival in Poland attempting to use this method (they were in an argument about calculus).

It’s a bit like neuro-linguistic programming. Something we know works, and can see real-world results from (sometimes quite negative results as with cults) but definitely don’t fully understand.

I like the rhetorical style of the Gaelic ‘battle poetry’ as a broad genre, the passage I quoted above is very similar in style to some of the writing in the Irish mythological cycle books, and I thought in particular it reminded me a lot of the language in this book called “The War of the Irish with the Foreigners”