Check out this highly unusual reproduction made by Dr. Fabrice Cognot: 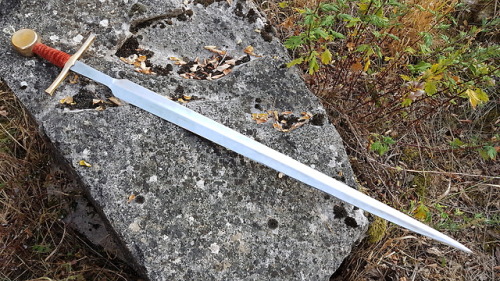 …I recall seeing a children’s book in my elementary school that featured characters with these goofy extendo-tangs in front of the guard. When I looked back on it before, I just figured the illustrator must have seen images of old swords whose fittings were loose. However, maybe he had seen something akin to Dr. Cognot’s reproduction, either in art or as an existent piece.

Note that the extendo-tang feature is not unlike the blade profile of many fantasy swords, where the connection to the crossguard is fairly narrow, and then the blade swells into a pair of points which are sharpened like the rest of the blade. I used to draw swords like that all the time, because they looked so cool. People, it seems, have always seemed to think this looked cool in retrospect.

In a practical sense, this is not necessarily a bad feature depending on the usage of the sword. A long tang section in an arming sword could allow for a comfortable second hand on the weapon, not unlike the designs seen on large Renaissance swords just about a century later. If the extended tang is shorter, it can allow very safe “fingering” of the blade around the crossguard without risking cutting the hand. Add a complex hilt, and you have a very modern sword indeed. As per my fantasy sword doodles (which I still occasionally make), I don’t like overly complex hilts, but the extended tang, complex cross (which does not incorporate a knuckle bow), and flared blade near the cross offer both good protection and control of the weapon. That said, it’s not a bad element to add to a fantasy weapon if it’s done sensibly, and in fact it must have made enough sense for people to do it in a historical sense!