Here is yet another reproduction, but this time based on a definite artifact: 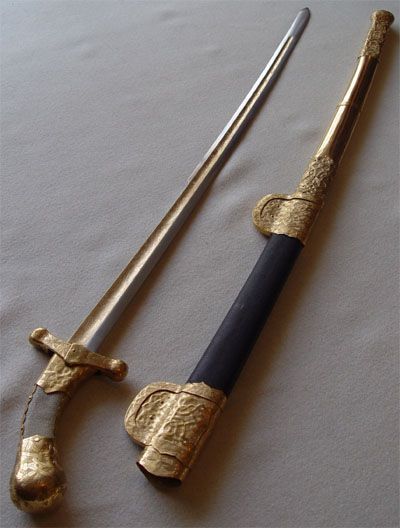 …Please consider adding that to the list of items you and I will never be able to afford.

Although this is not the type of sword I generally gravitate to, and I feel that the sentiment that swords only improved as time progressed is questionable, by the latter standards, “Charlemagne’s sabre” is a highly sophisticated weapon. The blade is not at all unlike the “general” form of a British 1821 cavalry sabre, featuring an effective point and gentle, but not overly aggressive curve. Both weapons featured a short edge, though the yelman on the centuries’ earlier weapon is way cooler than the one from 1821.

Next, the, dare-one-say, ergonomic pistol-type grip is an incredible pairing with the blade. By virtue of hilt design, this sword generally achieves the design goals of the last cavalry “sabres” put into military service while also retaining an effective cut! The straight point, with that hilt, allows the wielder to simply aim the sword while charging and lance his opponents, simply turning the wrist as he passes to clear the area. All the while, remains more than enough blade presence for cutting, something an M1913 Patton sabre or British 1908 sabre would struggle to do on a good day. The only advantage the later mass-produced weapons have are their metallurgy and integral hand protection. With the latter, depending on the other kit available, that might not be a necessity, either!

In short, if you are somehow ever contracted to design a new military sabre for some power somewhere, you should consider the “Charlemagne” sabre as a basis. As Solomon once said, “there is nothing new under the sun.”