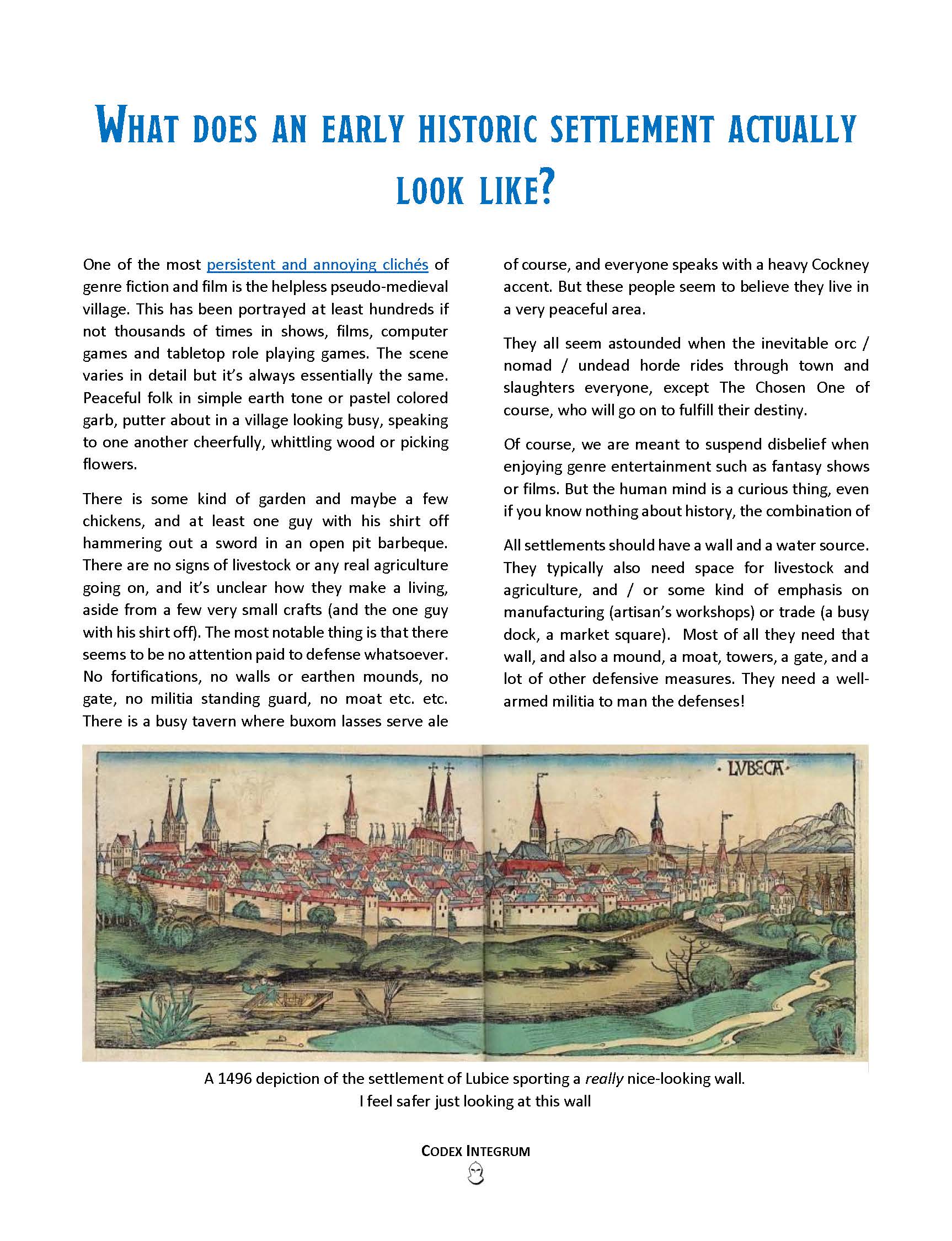 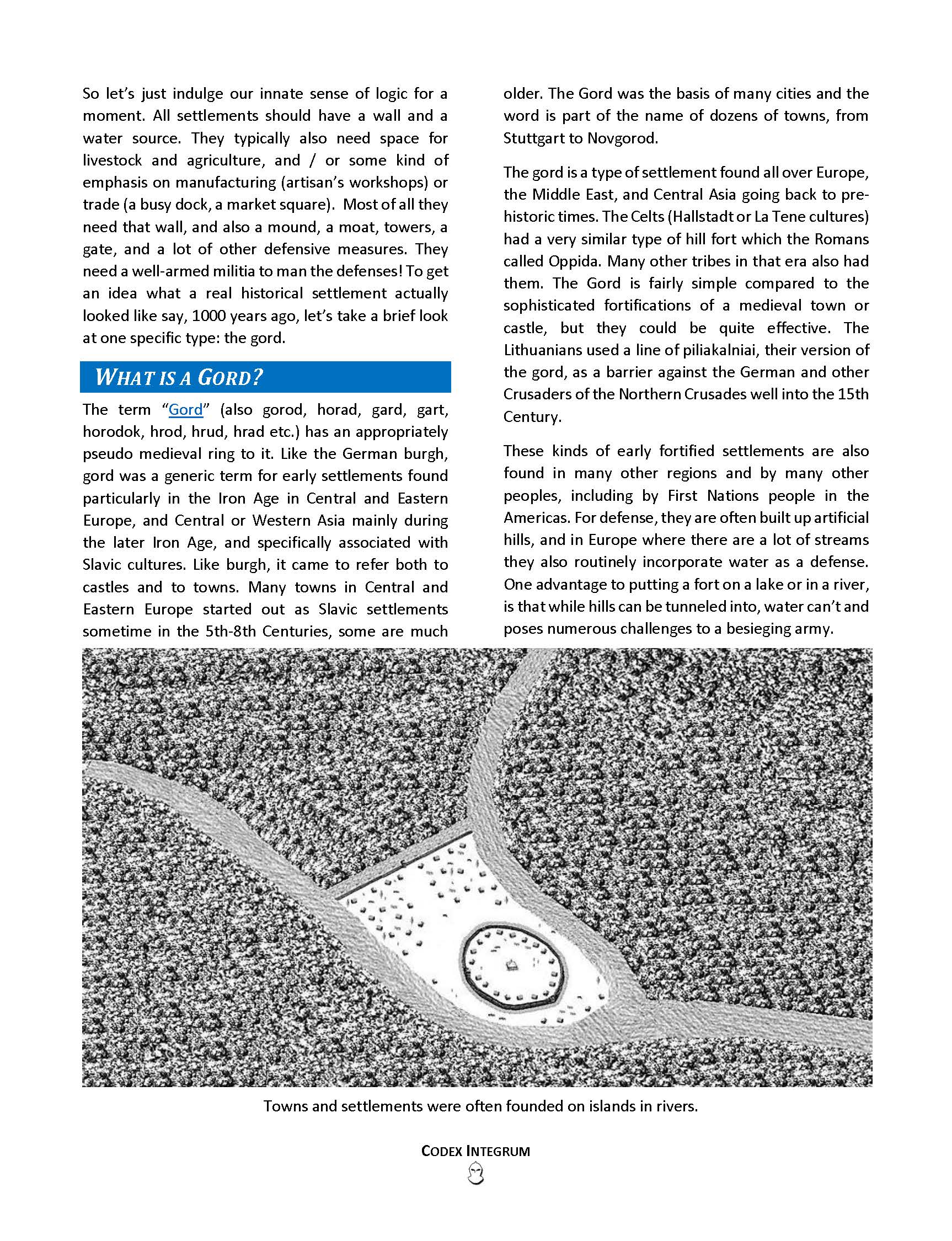 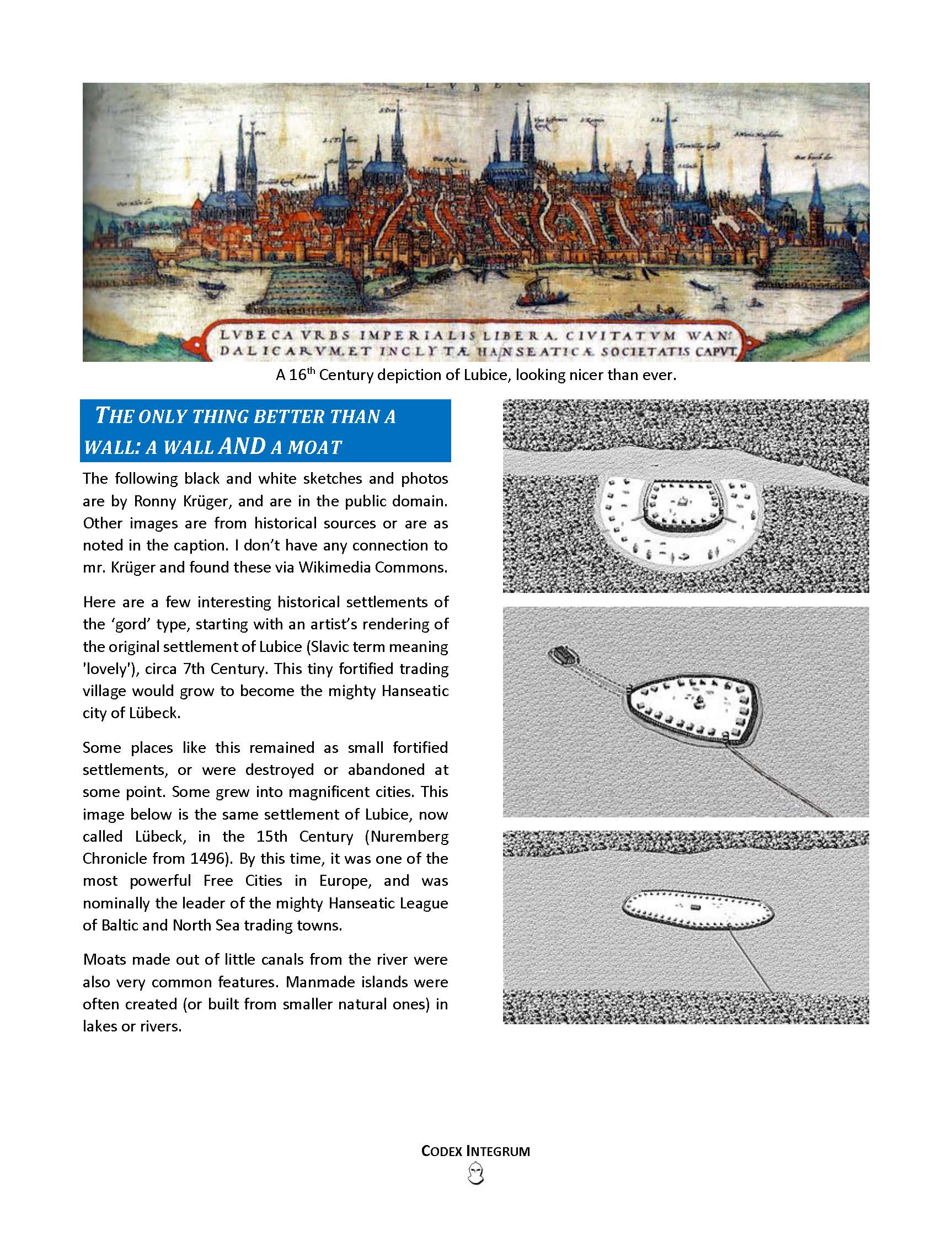 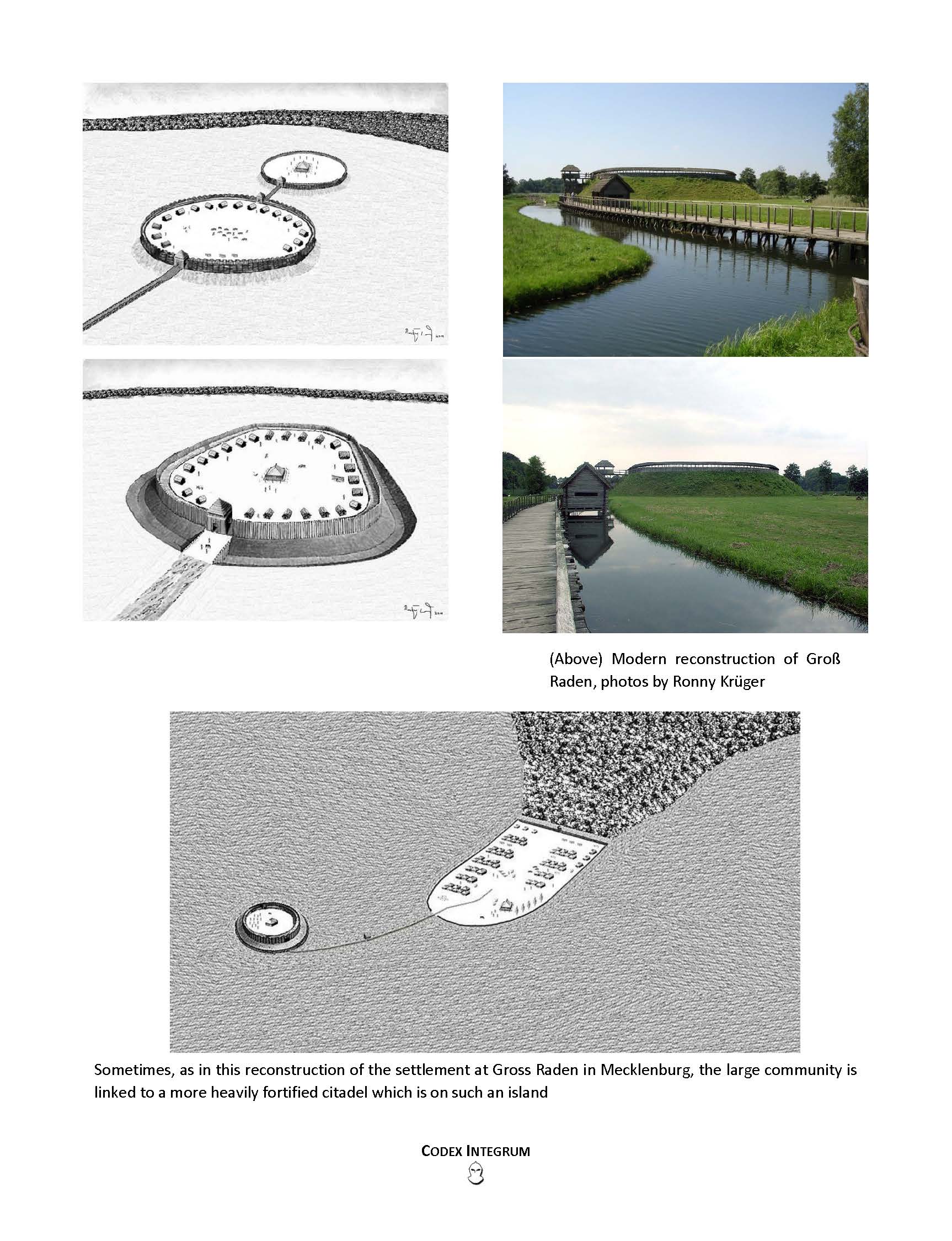 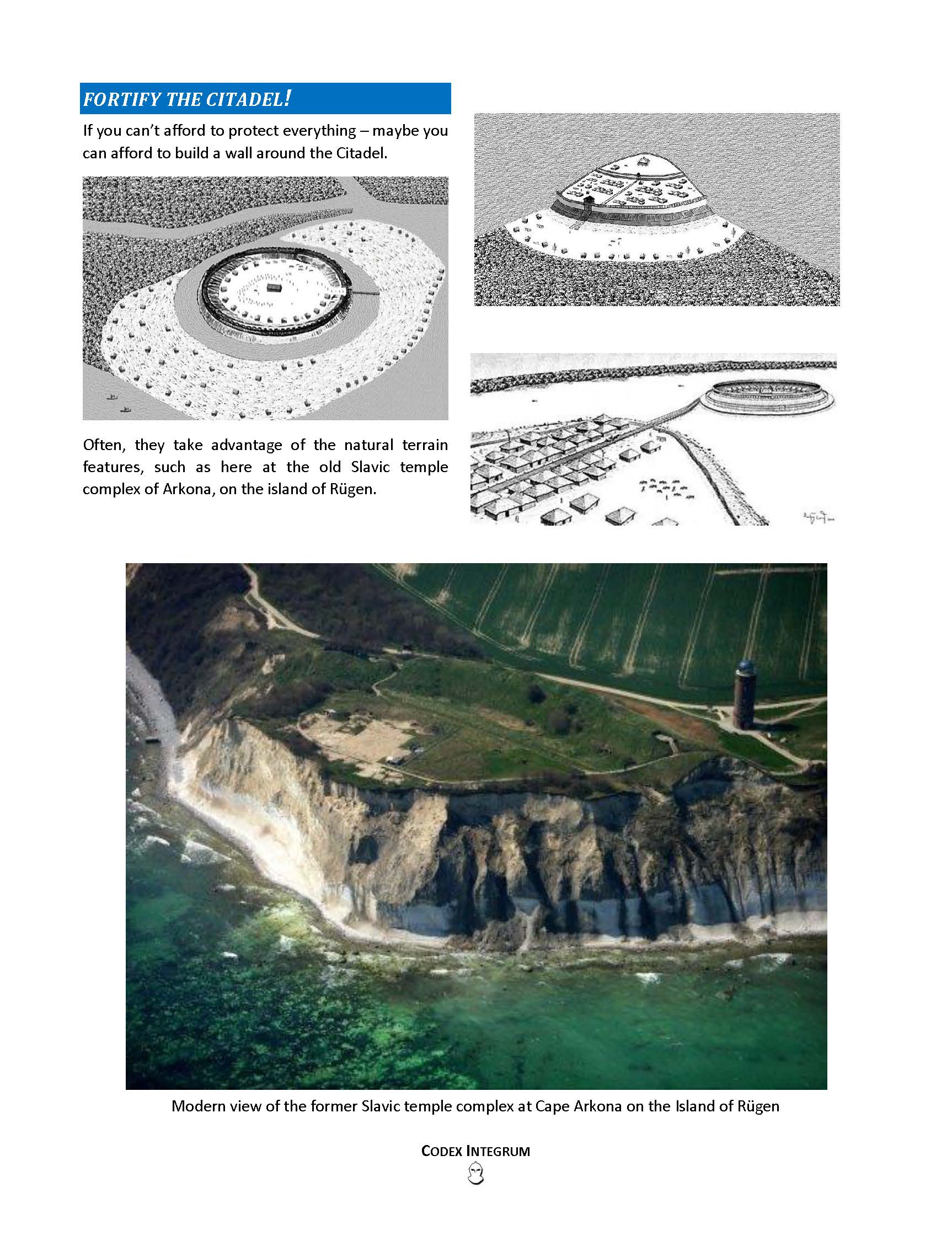 One of the most persistent and annoying clichés of genre fiction and film is the helpless pseudo-medieval village. This has been portrayed at least hundreds if not thousands of times in shows, films, computer games and tabletop role playing games. The scene varies in detail but it’s always essentially the same. Peaceful folk in simple earth tone or pastel colored garb, putter about in a village looking busy, speaking to one another cheerfully, whittling wood or picking flowers.

There is some kind of garden and maybe a few chickens, and at least one guy with his shirt off hammering out a sword in an open pit barbeque. There are no signs of livestock or any real agriculture going on, and it’s unclear how they make a living, aside from a few very small crafts (and the one guy with his shirt off). The most notable thing is that there seems to be no attention paid to defense whatsoever.  No fortifications, no walls or earthen mounds, no gate, no militia standing guard, no moat etc. etc. There is a busy tavern where buxom lasses serve ale of course, and everyone speaks with a heavy Cockney accent. But these people seem to believe they live in a very peaceful area.

They all seem astounded when the inevitable orc / nomad / undead horde rides through town and slaughters everyone, except The Chosen One of course, who will go on to fulfill their destiny.

Of course, we are meant to suspend disbelief when enjoying genre entertainment such as fantasy shows or films. But the human mind is a curious thing, even if you know nothing about history, the combination of

All settlements should have a wall and a water source. They typically also need space for livestock and agriculture, and / or some kind of emphasis on manufacturing (artisan’s workshops) or trade (a busy dock, a market square).  Most of all they need that wall, and also a mound, a moat, towers, a gate, and a lot of other defensive measures. They need a well-armed militia to man the defenses!

So let’s just indulge our innate sense of logic for a moment. All settlements should have a wall and a water source. They typically also need space for livestock and agriculture, and / or some kind of emphasis on manufacturing (artisan’s workshops) or trade (a busy dock, a market square).  Most of all they need that wall, and also a mound, a moat, towers, a gate, and a lot of other defensive measures. They need a well-armed militia to man the defenses! To get an idea what a real historical settlement actually looked like say, 1000 years ago, let’s take a brief look at one specific type: the gord.

What is a Gord?

The term “Gord” (also gorod, horad, gard, gart, horodok, hrod, hrud, hrad etc.) has an appropriately pseudo medieval ring to it. Like the German burgh, gord was a generic term for early settlements found particularly in the Iron Age in Central and Eastern Europe, and Central or Western Asia mainly during the later Iron Age, and specifically associated with Slavic cultures. Like burgh, it came to refer both to castles and to towns. Many towns in Central and Eastern Europe started out as Slavic settlements sometime in the 5th-8th Centuries, some are much older. The Gord was the basis of many cities and the word is part of the name of dozens of towns, from Stuttgart to Novgorod.

The gord is a type of settlement found all over Europe, the Middle East, and Central Asia going back to pre-historic times. The Celts (Hallstadt or La Tene cultures) had a very similar type of hill fort which the Romans called Oppida. Many other tribes in that era also had them. The Gord is fairly simple compared to the sophisticated fortifications of a medieval town or castle, but they could be quite effective. The Lithuanians used a line of piliakalniai, their version of the gord, as a barrier against the German and other Crusaders of the Northern Crusades well into the 15th Century.

These kinds of early fortified settlements are also found in many other regions and by many other peoples, including by First Nations people in the Americas. For defense, they are often built up artificial hills, and in Europe where there are a lot of streams they also routinely incorporate water as a defense. One advantage to putting a fort on a lake or in a river, is that while hills can be tunneled into, water can’t and poses numerous challenges to a besieging army. 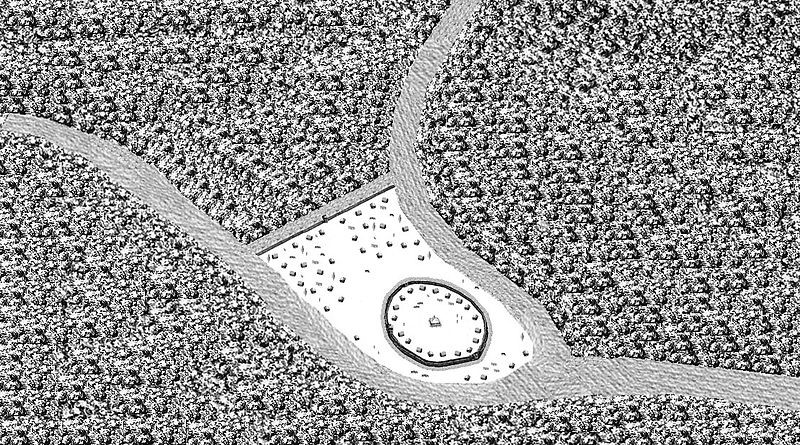 The only thing better than a wall: A wall and a moat!

The following black and white sketches and photos are by Ronny Krüger, and are in the public domain. Other images are from historical sources or are as noted in the caption. I don’t have any connection to mr. Krüger and found these via Wikimedia Commons.

Here are a few interesting historical settlements of the ‘gord’ type, starting with an artist’s rendering of the original settlement of Lubice (Slavic term meaning ‘lovely’), circa 7th Century. This tiny fortified trading village would grow to become the mighty Hanseatic city of Lübeck.

Some places like this remained as small fortified settlements, or were destroyed or abandoned at some point. Some grew into magnificent cities. This image below is the same settlement of Lubice, now called Lübeck, in the 15th Century (Nuremberg Chronicle from 1496). By this time, it was one of the most powerful Free Cities in Europe, and was nominally the leader of the mighty Hanseatic League of Baltic and North Sea trading towns.

Moats made out of little canals from the river were also very common features. Manmade islands were often created (or built from smaller natural ones) in lakes or rivers. 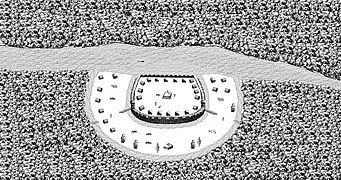 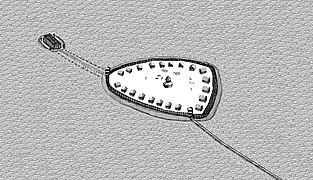 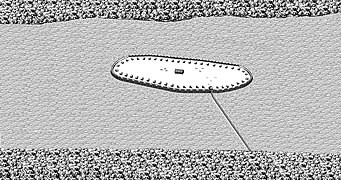 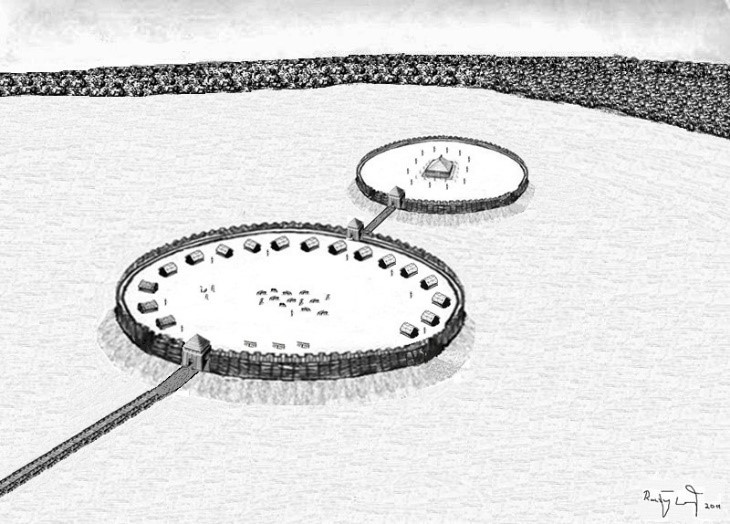 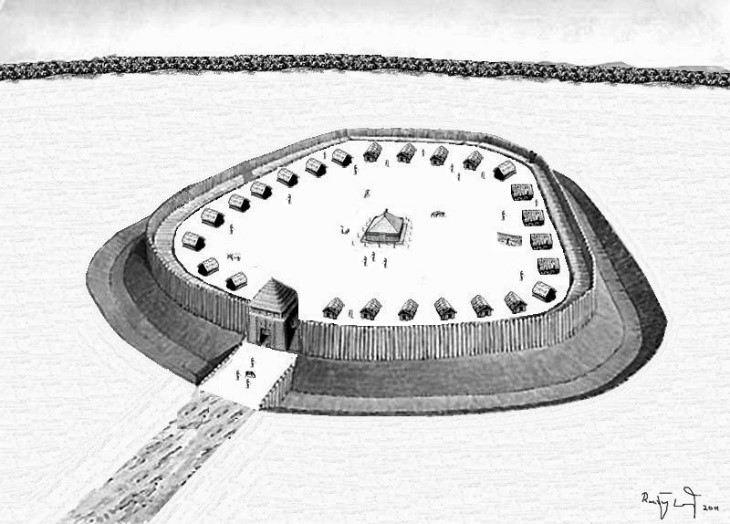 If you can’t afford to protect everything – maybe you can afford to build a wall around the Citadel.

Often, they take advantage of the natural terrain features, such as here at the old Slavic temple complex of Arkona, on the island of Rügen. 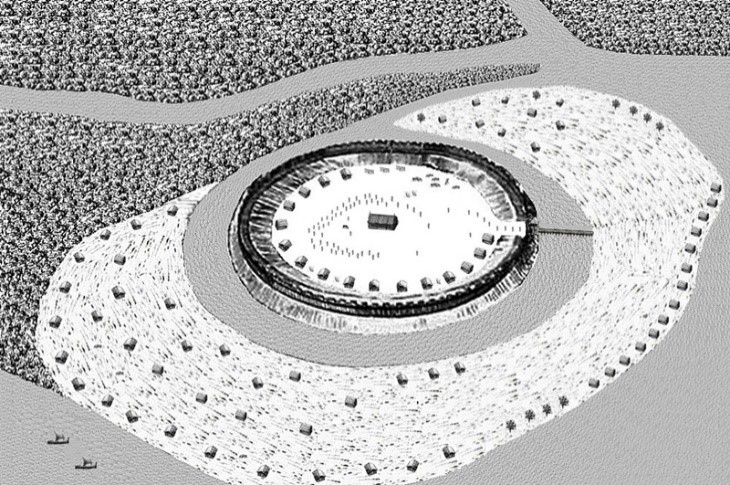 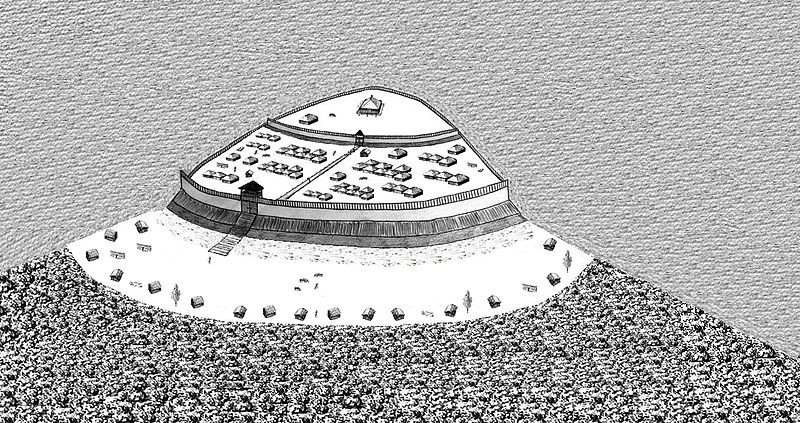