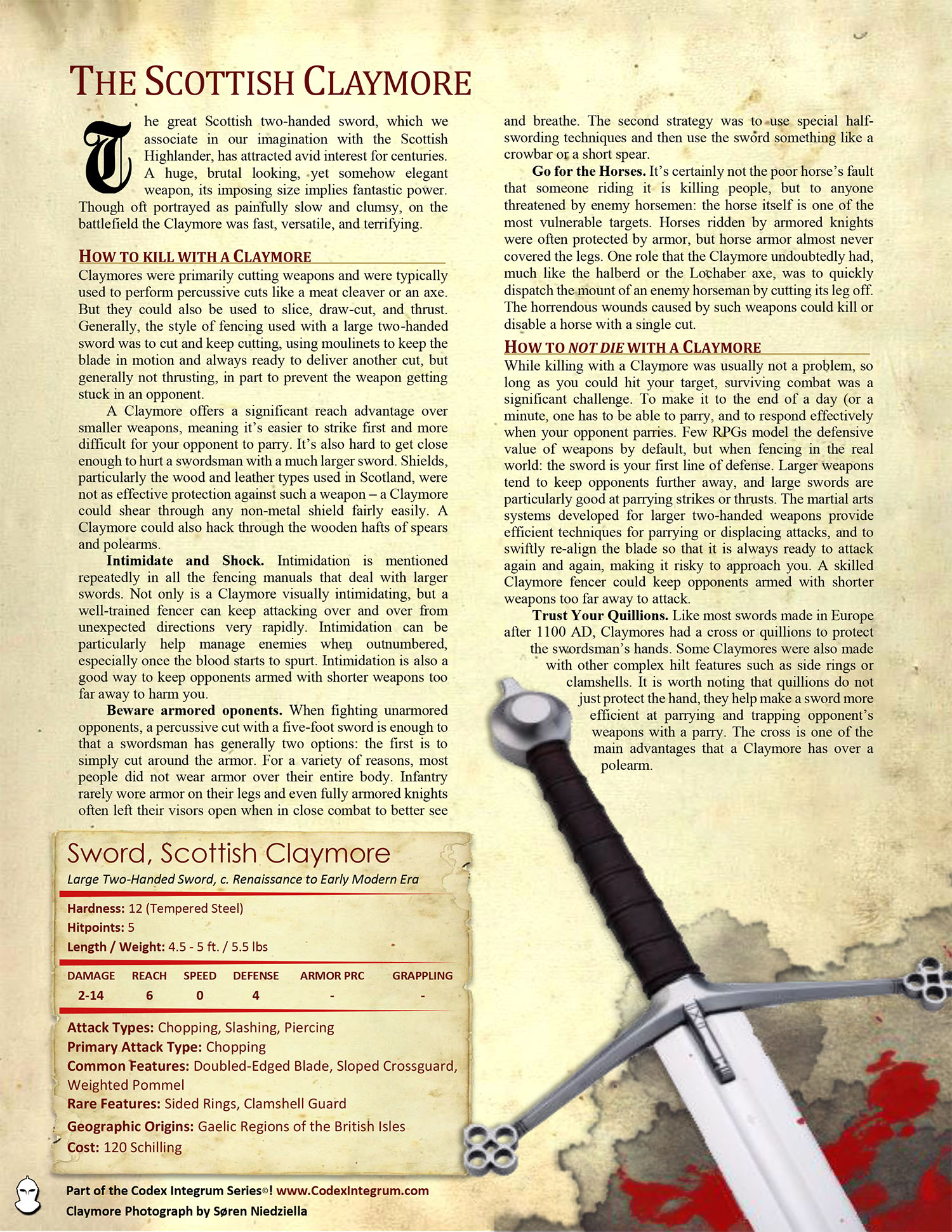 The great Scottish two handed sword which we associate in our imagination with the Scottish Highlander, has attracted avid interest for centuries. A huge, brutal looking, yet somehow elegant weapon, it’s imposing size implies fantastic power. It looks heavy and intimidating, and its origins are mysterious, but we are going to take a close look at this iconic weapon and break down how it was used and what RPG systems usually get wrong.

How to kill with a Claymore: what RPGS usually get wrong

A lot of RPG’s and computer games, not to mention TV shows and movies, portray any kind of two handed sword as painfully slow and clumsy. Real weapons of this type were not as heavy as many once thought (older RPGs suggested there was such a thing as a ten-pound sword!) and trained swordsmen know how to cut with amazing speed by alternating true and false edge cuts and performing rapid moulinets. The Claymore is not a slow weapon!

Claymore’s were primarily cutting weapons, and more specifically, for the most part they were used to perform percussive cuts like a meat cleaver or an axe. But they could also be used to slice or draw-cut, and to thrust. Generally, the style of fencing used with a large two-handed sword like a montante was to cut and keep cutting, using moulinets to keep the blade in motion and always ready to deliver another cut, but generally not thrusting, in part to prevent the weapon getting stuck in an opponent. There was a cultural preference for cutting over thrusting in German-speaking areas which made it into German law and also appeared in fencing manuals of the 15th and 16th Centuries. We know that many weapons were imported from Germany into Scotland and German culture had some influence on the Scots. But the fencing masters also incorporated thrusts and slices in the fencing system even with the big swords. It all depends on the context.

One virtue of a larger weapon is reach. A Claymore gives a swordsman a significant reach advantage over smaller weapons, meaning it’s easier to strike first and more difficult for your opponent to parry. It’s also hard to get close enough to hurt a swordsman with a much larger sword. Shields, particularly the wood and leather types used in Scotland were not as effective protection against such a weapon – a Claymore could shear through any non-metal shield fairly easily. A Claymore could also hack through the wooden hafts of spears and polearms, (and for this reason many polearms were made with iron langets to protect the shaft, even though this added weight).

Parry or Perish: if your RPG won't let you defend with your claymore then you are going to die

While killing with a Claymore was not a problem, so long as you could hit your target, surviving combat was a significant challenge, and that is where the real skill came in. Part of the swordsman’s defense came from the sheer intimidation factor, but this alone was not sufficient for survival. To make it to the end of a day (or a minute) of fighting, and more importantly to own the close-combat / melee battle space that this weapon was specialized for, one has to be able to parry, and to respond effectively when your opponent parries.

Few RPGs model the defensive value of weapons by default. But when fencing in the real world, the sword is your first line of defense. Larger weapons tend to keep opponents further away, and large swords are particularly good at parrying strikes or thrusts. The martial arts systems developed for longswords and larger two-handed weapons provide efficient techniques for parrying or displacing attacks, and to swiftly re-align the blade so that it is always ready to attack again and again, making it risky to approach you. A skilled Claymore fencer could keep opponents armed with shorter weapons too far away to attack.

Like most swords made in Europe after 1100 AD, Claymores had a cross or quillions to protect the swordsman’s hands. These tended to be particularly large on most two-handed swords and Claymore’s are no exception. Some Claymores were also made with other complex hilt features such as side rings or clamshells. It is worth noting that quillions do not just protect the hand, they help make a sword more efficient at parrying and trapping opponent’s weapon’s with a parry. The cross is one of the main advantages that a Claymore has over a polearm like a halberd.

We’re now going to take a look at how a more historical Scottish Claymore could be implemented in various RPGs. If you’re just interested in military history or medieval technology: check out my deep dive into the origins of the Scottish Claymore & a history of giant swords.

How to use a Claymore in DnD 1e

1e is meant to be simple, and damage is almost the only thing that differentiates one weapon from another. The two-handed sword is one of the mightiest weapons in 1E, as it does d10 damage against size M enemies and an impressive 3D6 against size L. There was debate back in the day as to whether this is the true six foot zweihander type sword a smaller type, but it makes sense to make the Claymore damage D10 vs M, and perhaps since it is 80% of the size of a zweihander, 2D8 against size L. This is a good start but the Claymore should give you a bit more than epic cutting damage.

Two handed swords were used for defense as well as offense. If a shield improves AC by one, then a two handed sword should probably do the same, but only in melee (swords don’t defend as well against missile weapons, and definitely not bows or crossbows, as a shield does). This way you can confer a little bit of extra value to a Claymore, particularly for lower level characters, without adding a lot of complexity since 1e is meant to be simple. To be consistent you may want to confer this ability to some other two-handed weapons.

If you wanted to model the intimidation effects of this weapon, you could require certain enemies witnessing one of their allies being killed by a Claymore to pass a Saving Throw or suffer from a Fear effect, like the spell. In keeping with the “Old School” tradition it may be advisable to apply this effect to relatively weak monsters, like Goblins or Kobolds but not to players. On the other hand, if you are playing a ‘grim’ OSR game, a Scottish hill giant with a Claymore could be pretty scary…

How to use a Claymore in Pathfinder / 3.5e

D20 / 3.5 gives us a bit more granularity but it’s also a bit more complex. But there are a few things to work with. Any kind of two-handed sword is fairly difficult to learn to use effectively, so you can require an Exotic Weapon Proficiency for the Claymore. This allows us to do a bit more with it since it requires more investment by the Character. Though a Claymore is not as long as a halberd, with the right footwork you can strike out to quite a good distance, and with correct technique you can fight close-in too. So allow it to be used as both a melee weapon and as a reach weapon. This way it can compete with polearms as it was used historically.

A five-foot sword should provide some protection in melee. In 3.5 a shields protection ranges from +1 for a buckler or a small shield, to +2 for a large shield. So a Claymore should provide at least a +1 to AC. To model the intimidation effect, allow a Feint as a Free Action (instead of a standard action) once per round, if the bluff succeeds, your opponent must use up a Move Action to move back out of the way. This way you can scare off one enemy before cutting another.

As for Feats, Combat Reflexes is a good one for the Claymore, as it allows extra Attacks of Opportunity so long as you have a high Dex mod. This is a natural for a bodyguard type situation. Combine this with the Feint / Bluff and you are starting to get quite good at crowd control. Improved Sunder is a useful Feat too, allowing you to cut the hafts of enemy polearms or break their swords and shields.

How to use a Claymore in 5e

5e is roughly midway between 1e and 3.5 in granularity, but the ethos is to keep it simple. A Claymore is a variant of a Greatsword in 5e. To represent the training needed to master this weapon, use a Fighting Style, but instead of the “Great Weapon” Fighting Style, which lets you re-roll a 1 or a 2 on your attack die, create a “Highland” Fighting Style to confer two advantages: Your Claymore provides a +2 AC against melee attacks, and (to model the reach advantage of the Claymore) you gain Advantage in your attack die roll any time you attack someone using a shorter weapon (and weapon that is not either a two-handed or a reach weapon). Since 5e doesn’t really have a Feint mechanic perhaps it’s better to just skip the intimidation factor.

How to use a Claymore in Codex Martialis

Our in-house combat system, Codex Martialis, gives you granularity by default, with an emphasis on fast action. In the Codex Martialis system, all melee weapons are rated for reach, speed, and defense. The reach bonus applies to an opening attack, speed to a followup attack, and defense is a bonus you get whenever you use Active Defense. So the Claymore gets a +6 Reach bonus, a 0 speed bonus, and a +4 Defense bonus. Attack types are Slash / Chop / Pierce, with the primary attack type being Chop. Damage is a D6+ a D8

With the Codex system you can attack your opponent’s weapon or shield without any penalties. You can remain at distance or close to melee, and you can Actively Defend (by spending dice) or rely on your Passive Defense. The Claymore lends itself to several Martial Feats, and a few worth mentioning include Feint (draw off your opponent’s Martial Pool dice), False Edge Cut (Improve your weapon speed by +2), Meisterhau (aka ‘The Mastercut’ – attack and defend with the same die roll), Abzug (Free Dice on defense while exiting combat range), and Durchlauffen (cut at close range, bypassing your opponents weapon defense), and Half Sword Fighting (suffer no penalties fighting at very short range and make enhanced thrusts against armored opponents).

For more deep dives into historical weapons, check out the Codex Martailis: Weapons of the Ancient World series.